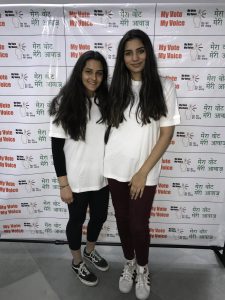 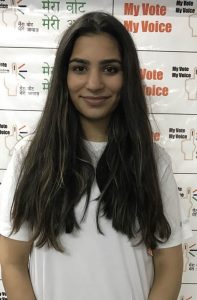 I am a student at the British School, New Delhi. I am the founder of My Vote My Voice and have been involved in this initiative since the 10th grade. As part of a school-led social initiative Annapoorna, since the 9th grade I taught Mathematics and English to the children at low-income community (slum) opposite our school. When I met these children and talked to them, I saw how truly appreciative they were of the opportunity they were getting, I realized that these children were just like me: enthusiastic, loud and innocent.

This was supremely eye-opening. I started to question why these children were stuck in a cycle of poverty that they most probably could never escape; I began to wonder how I could help break this vicious cycle. During my conversations with people there, I came across a recurring theme of political interests and their inability to vote. The prevailing opinion was that the elected representatives for decades have favoured their political careers over the interests of the people, resulting in widespread and systematic inequality. This made me realize that the system is broken, and the only way to fix it is to make the politicians recognize the need of these families through the exercise of the most fundamental political institution in any democracy – voting. I realised that teaching underprivileged children only addresses the effects and not the cause of the underlying problem. The real work I felt, consisted in breaking the political exclusion of migrant workers and thus enable them to reclaim their role in the democratic process. I decided to help workers register as voters at their place of work.

But there was a problem. A lot of these people were not registered voters, or were domestic migrants and were therefore only registered to vote in their native state. Therefore they could not engage with the democratic process; they could not voice their concerns; they could not come together in a strong political voice to demand change. So this is what I decided to address.  Drawing strength and inspiration from my experience of enrolling first time voters while I was interning for Bhartiya Janta Party(BJP) prior to Delhi state election in 2015, I decided to undertake further research. In my preliminary research I understood the enormity of the problem: 120 million people in India are Domestic Migrant Workers, the majority of them have to relinquish their right to vote as there is no absentee voter system. I discovered that there were misconceptions with regard to documentation required for registration. The government have simplified rules regarding age and address proof documents but the workers were not aware. I realised that I could make a significant difference to this situation simply through providing clearer information and better education: I would conduct a pilot awareness program and voter registration drive. This is how My Vote My Voice (MVMV) – in Hindi, “मेरा वोट मेरी आवाज़”. – was born.

My personal goal is to be part of a broader effort to help people engage with the democratic processes of India, because I feel this is the only way we can make progress – by rejecting or supporting ideas with our votes; by helping shape the policy of India, one ballot at a time.

Given the scope of work, I realised that I will need an active partner in this project and decided to approach my friend and fellow student at the British School Siya Malhotra who also volunteered at Annapoorna and felt passionately about this cause.

Having volunteered at a number of NGOs and interacted with many people living in slums, I have been exposed to a great deal of hardships and struggle that underprivileged people in India face. Over the course of a few years, I gained immense empathy towards these people and got motivated to help them in any way I could.

However, my inspiration for this project did not only stem from my exchanges with several such people, instead, it began within the walls of my home. Growing up, I always came to notice troubles and difficulties that migrant workers working in my house faced- whether it was being unable to read or write, or having limited resources or guidance to deal with several struggles in their lives. These people were the ones with whom I interacted every single day, and had practically known my entire life; people who had watched me grow up and were like family to me. I immediately gained an interest in helping them in any way that I could and giving back to them because of so much that they had done for me. So, when I was 8 or 9 years old, I decided to teach the workers in my house the alphabets and simple, everyday English words. However, at such a young age, this endeavour did not last too long. Then, at the age of fifteen, I decided to tutor the workers’ children who lived in the nearby area, which is something am still doing today.

During these interactions that I had over the past few years, I gained a real passion to help as many people as I could- whether it started within the confines of my home or outside. So, when Noor approached me with the idea to start a voter registration drive, I was more than enthusiastic to join in the cause.

I have always been an enthusiast for civil rights and justice, so this seemed like the perfect opportunity to help make a meaningful difference to people’s lives- especially those who contribute greatly to our everyday lives. Giving people the right to vote and giving them a sense of identity was not the only thing that seemed so great about the project, but also the fact that through this we have the opportunity to directly take our country one step ahead, by registering more people to vote so that the government is what people want, and not what they have to simply come to terms with. This project helps domestic migrant workers from all areas to come together and be a part of the future of their country, and have a say in it. Hence, we didn’t start this just for workers, but also for India.

This project was the best way to give back to the community, while also standing up for the causes that mean most to us and for which we are passionate about. So, a few meetings and drives later, here we are! 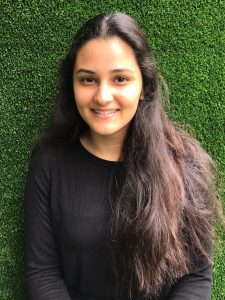